At a time when the number of  factory farms has risen precipitously, cutting regulatory staff tasked to ensure these operations remain compliant with regulations is a curious, questionable move.  But, in WI, this is precisely the what is happening.

According to a recent article in the Milwaukee Journal-Sentinel, pressure to reduce budgets has resulted in a 18% reduction in staff at the WI Department of Natural Resources, since 1995. This, while the number of Concentrated Animal Feeding Operation (CAFO) permits in WI has more than doubled in the past decade. 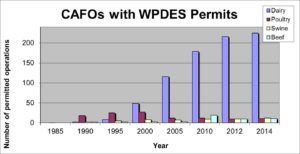 Several counties in WI are struggling with — perhaps suffering under is a more appropriate description — massive increases in dairy cows in their region, and the incredibly large amounts of manure these herds create. Kewaunee County, as has been mentioned numerous times in prior blogs here, is perhaps the best current example.

While nobody argues the value of manure as a valuable source of fertilizer for farm operations, it is also clear that manure is a primary contributor to non-point pollution which results in devastating algae blooms as seen annually in Lake Erie, Lake Okeechobee, and many other rivers, streams and lakes across the USA.

But just as likely, if not even more so, is that environmental costs in the form of contaminated ground water, surface water dead zones, algae blooms, and the inherent health risks within area communities, will far outweigh whatever meager savings and questionable efficiencies are attained.

I recently joined a terrific organization, Clean Water Action Council (CWAC) of Northeast WI, which provides superb content for anyone interested in clean water in Wisconsin – in all its forms. Ground, surface, non-point (runoff from communities and agriculture, etc.), and more. For 31 years, CWAC has been working to support legislature, and calling attention to issues that have an impact on clean water in and around Green Bay, WI, including the Fox River Valley, Kewaunee County, and Door County.

Since this area of the Midwest is one that is deeply – and seemingly negatively –  impacted by a wild increase in Concentrated Animal Feeding Operations (CAFOs), CWAC is a great example of a local group making a difference, and they are not alone.

Indeed, on its site CWAC offers information links and tools that can even extend beyond its target area. An example:

Who are your local water polluters?

Two national websites provide detailed data about pollution sources in local communities. Just type in your zip code and you may find more than you really wanted to know!

The Scorecard, by Environmental Defense http://www.scorecard.org/

On a national level, Clean Water Action (CWA) works to promote clean water and a healthy environment, via its network of state organizations.

What does it all mean? Good news — and terrific resources —  for any interested in becoming involved with, or educated about, clean water initiatives.

Ok. So Donald Trump staged the greatest upset in US political history with his election as the 45th President of the United States. Some are happy. Some are sad. As usual, and I suspect unfortunately, about this US citizens are split 50-50.

Politics, grants, and fundraising for Clean Water Warrior (CWW) aside, what does the election of Donald Trump mean for clean water initiatives across the USA?

Presently, the news is not good. But this may change.

The Not Good News

On clean water pollution and Harmful Algae Blooms (HABs), it is 100% certain Donald Trump does not know what he’s talking about. Case in point: because it is a hot-spot for clean water issues, we often reference Lake Okeechobee in FL. As it turns out, when President-Elect Trump campaigned in FL, he presented his (ignorant, and incorrect) opinion on how to resolve the problems with the beleaguered lake:

“My administration will address important environmental priorities like the Everglades and ensure quality water all across America, including the fixing of water problems like Lake Okeechobee,” Trump said, according to an article from the Miami New Times. “It’s amazing. You know, Lake Okeechobee, they’re always letting the water out. Do you ever notice we always have droughts? They’re always letting the water out. I said keep it in! We won’t have any droughts.”

I could explain why he is wrong, completely wrong, with this non-solution. But I will instead reference Dale Gawlik, professor and director of Florida Atlantic University’s Environmental Science Program, an expert who says Trump’s idea will hurt Lake O.

“If you were completely uncaring about the ecology of Lake Okeechobee and the fish and birds that live there and just view it as a big holding tank of water, what he’s saying could have some merit,” Gawlik told the New Times.

“The lake can’t go above a certain level because of the structural integrity of the lake, so you’re capped out there. We’re already almost there. What (Trump’s) suggesting is you throw out all the ecological importance, which is tied to a lot of tourism and industry there, and just look at drought alone.”

Ignorance is bliss and, apparently, not a hindrance to getting elected President of the United States. Even in Florida where, despite his zero knowledge about the single most important ecological piece of land and water IN THE STATE, he won the electoral votes.

So … knowing almost nothing about the national clean water crisis is the “not good” news. But, hold on. With President-Elect Trump there IS good news. Really good news.

He is building his platform on improving the infrastructure of the United States. Making it the best in the world, he says.

If Donald Trump can be held accountable for words spoken and vows pledged during his successful campaign, infrastructure improvements sit atop his to-do list.

As each of these projects commence via a cooperative effort of Federal and State government, and private industry, clean water will at times be an unavoidable part of the planning.

Though they have nothing to do with Trump, exciting clean water infrastructure programs are already underway via support from the United States Department of Agriculture (USDA).

Can we expect even more attention and funding like this during President Trump’s term?

The man staged the greatest political upset in American history. If he is smart enough to do that, he can certainly learn the basics about HABs, and how to combat them.

I believe he will and, if so, the USA will lead the way in curbing in some places, and eliminating in others, HAB activity.

Leading the way in providing solutions for cleaner, safer water.

That will be a huge step in Trump’s mission to make America great again.

A review of some terrific articles I have read over just the past few weeks, regarding Harmful Algae Blooms (HABs), is provided below. You will note that the HAB problems span the United States.

Here is hoping any of these offers greater insight into the issues and problems HABs create for the communities affected. If any articles grab you — please share with us your thoughts!